Grunch is a multi OS application keeping downloading, installing, updating and uninstalling away from the user. 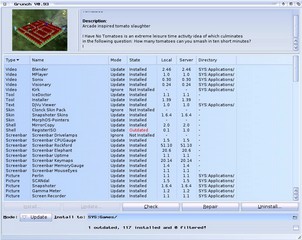 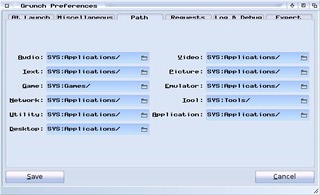 Sounds like some ordinary packet manager? Maybe, but Grunch is more. It's kind of a software center, where you can click and search for all the software you need. No more searching for the right OS version and the right download page, no more dealing with libraries and other files required to get the stuff to work.

Grunch is taking over.

There were other packet managers before and they all failed badly you may say. Yes, that's true. They had several design flaws in flexibility.

The biggest reason making previous packet manager a fail was that Developers needed to support them. Most developer simply ignored the solutions, or they tested them and the benefit wasn't worth the needed work to set up proper archives.

Grunch is different! There are hundreds of people out there able to maintain their system by hand. Why not allow them to participate to the project?

This is the big goal or Grunch. Everyone can help. Servers in this case are simple http servers. Nothing special, but centralized enough to feed the masses out there with new and updated data files.

Some people are translators and love to fix and update catalogs, while others love to use them. Why not bring them together? A simple database file on a server and zwoosh. Quick interaction between both groups without any need of placing those files into a global overcomplicated database.

Maintaining the database is always a big issue. In other words: What happens when geit sits dead in his chair? The solution would be quite easy. Someone would take the latest database, change the URL inside to his webpage and uploads the database file right to that place. The users now are able to download this modified database file once by using a browser and after placing it into their Grunch drawer, they get all database updates from the new source without any config change, maintained by the new guy. Simple isn't it?

Well, I talked about installing and updating a lot and you may say "yeah, it's just a packet manager".

People talked about setting up an AppStore for MorphOS or AmigaOS. Well, there was much laughter, but frankly it's nice to have a centralised point, where you can search for software and a single click later the software is installed. (iPad user speaking). The result is a more flexible way than for example Papiosaur's Pack Ultimate. The pack is nice and helpful for new people, but it contains so much nice software which cannot be seen by people already have a preconfigured system, as it's an all or nothing solution.

And yes I did not install the pack for the same reason, too, but I downloaded it to simply drag over the stuff I needed. Grunch is (will be) kind of a software store where you search for stuff and install applications, test them and if you don't like or want the software, you uninstall it again. Today I got noticed about the OWB update by Grunch and a single click later it was installed. Even that click can be avoided by disabling update requests and enabling automatically update.

Dependencies are a big problem not only on MorphOS. Grunch knows and supports dependencies for installation and deinstallation. So if you want to install a game which needs PowerSDL, Grunch will check if PowerSDL is installed and if not a requester will pop up and shows the dependencies of the application. If the user continues PowerSDL gets installed, too. If he cancels the software installation gets aborted. If the user decides to uninstall PowerSDL, he gets a list of all Applications related to the pack and if the user continues all those programms get removed, too.